In this lesson we show you the most important idea in programming: defining your own functions! Functions let your program become shorter, better-organized, easier to read, easier to debug, and more reusable. In later lessons we will see other benefits like recursion.

We'll start with an example. Remember the function abs? It takes one argument (a number x), and returns its absolute value (which is x when x ≥ 0, and -x when x < 0). The way to define this function in Python is:

(Click here to test this code in the console.)

The Two Parts of a Function Definition

Everything after the first line of a function definition is the body of the function. The body is an indented block of code. Whenever the function is called, the body is executed on those arguments/inputs. Finally, when we reach this line in the function body,

the function stops running and returns «value» as its output. That is, the return value is the output of the function. As the abs example shows, the body may contain several return statements; but only the first one executed has an effect since the function stops executing afterwards.

Example: Defining and Calling a Function

The following program contains a function definition and some other statements that are executed after the function is defined. Can you guess what the output will be?

Here are the steps explained in words:

One common mistake you can make in defining a function is to forget the return statement.

As you can see, if no return statement is encountered in the body, then the function gives None by default. So, if you are failing some exercise because a function is returning None, the problem is often that some function inputs are not causing a return statement to be executed.

Another common mistake is forgetting to indent the code, resulting in an IndentationError.

As we saw in lesson 2, calling with too few or too many arguments causes an error.

Finally, if you make a typo when defining or calling the function, you will get an error saying that the function is undefined. 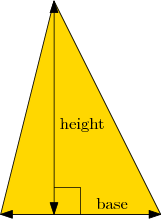 The functions above only took one argument, but a function can be designed to take any number of arguments. For example, you have been calling input() with 0 arguments (and you'll define a function with zero arguments in lesson 15A).

Here's an example with two arguments, about geometry. Suppose we need a function to compute the area of a triangle, given the length of its base and its height. The formula for the area is

Another important thing to note is that when a function is defined is different from when the function is executed. The body doesn't run until the function is actually called. To test this, complete the following exercise:

Multiple Choice Exercise: In-n-Out
What is the output of the following program?
Correct! The function f is defined first of all, but its body is not executed immediately. After the function is defined we print out not in f. Then the function is called, and the body is executed, printing in f. 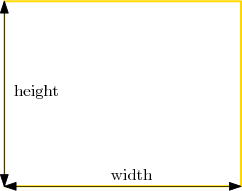 In the last exercise we ask you to write your own function of two arguments, to compute the perimeter of a rectangle. (The perimeter is the total length of all sides.) In a rectangle with a given width and height, its perimeter is given by the following formula:

See the diagram at right for an example.

Functions are the building blocks of well-built large programs: you can do the same task twice without writing out the same code twice, and you can re-use solutions to common tasks. Here is an example of building one function and using it inside of another one.

Drag the vertical gray line left and right to change how much code & visualization is shown.

You can see a new phenomenon in the visualization: under the "Frames" column, when we are at Step 8 of 30 in the execution, there are not only some global variables, but two frames (one for outer, and one for inner that was just created). The outer one stays waiting until the inner one is completely finished, then the outer one resumes. It happens to make another call to inner, and again outer waits; and when inner is finished, then outer continues to completion. Finally, we call outer and the whole process is repeated.

You are now ready for the next lesson!