We have seen one function already, print(), which outputs a message. To use a function you always write its name, followed by some arguments in parentheses (). The word argument basically means an input to the function. Then, the function does some action depending on its arguments. When there are multiple arguments to a function, you separate them with commas (,). For example, you can give multiple arguments to print; it will print all of them in order, with spaces separating them. We demonstrate in the example below.

A function may also give back a value (like an output). For example the function max() (short for maximum) gives back the largest out of all of its arguments, which must be numbers.


The name return value means the value that a function gives back. For example in max(42, 17) we say that "the function max returned the value 42."

The max function has a friend which behaves similarly: the min function returns the minimum (smallest) of its arguments.

Multiple Choice Exercise: Min and Max I
What is the output of the following program?
Correct!

Functions can be combined to create more complicated expressions.

Short Answer Exercise: Min and Max II
What is the output of the following program? Hint
Correct!

You are not limited to using functions that are pre-defined in Python. In a few lessons you will learn how to define new functions!

If you call a function with not enough arguments (inputs) or too many arguments, you get an error. For example, max requires at least one input:

It's very important to carefully read the errors that you get back, when your code doesn't work. Python will usually give you helpful feedback on what went wrong. However, sometimes you need to look around a little bit to diagnose the problem — here's an example.

Python says there is a syntax error, which means it can't understand what you're trying to do:

However, the line bigger = max(3, 4) is actually fine. The problem actually spilled over from the previous line: we forgot to add the closing parenthesis ) after smaller = min(14, 99 and Python started looking at the next line for the ). So, check the lines before and after what Python suggests, if you are stuck debugging your programs.

This is a two-part exercise using the min and max functions. There are connections between the cities of Maxime and Miniac with several bridges. There is a separate limit on the amount of weight that can be transported across each bridge. 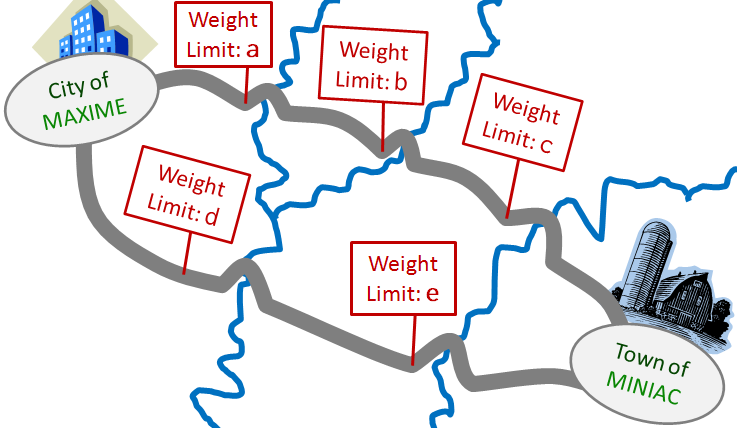 Your truck can take either route. Write a program that prints out the maximum weight that can be transported between the two cities. Assume that the variables a, b, c, d, and e contain the bridge weight limits. Hint Hint 2

Here is another code scramble, where you must drag-and-drop the lines to rearrange them into a correct program.

Once you finish the exercise above, you have two choices:

First, Python evaluates max(13, 7). Then, Python computes the minimum of this answer and 9.
A correct solution for the previous 'One Road' exercise will give you part of the correct solution for this one.
Try computing the largest weight that can be sent along each of the paths. How can those two numbers be combined to determine the overall limit, if you have the freedom to choose either path?
Skip to toolbar