[Python for Kids and Parents]

Lesson 11 has three parts A, B, C which can be completed in any order.

In this exercise we will create four functions which perform geometric computations: 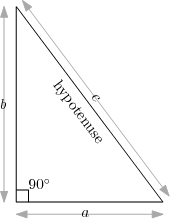 A right triangle is shown in the picture at the right-hand side. By definition, one of the angles of a right triangle equals 90 degrees (a right angle). The triangle has three sides. The side opposite the right angle has a special name: it is called the hypotenuse.

In the first problem, your task is to convert this theorem into a function which, given a and b, computes the length of the hypotenuse.

Recall that the perimeter of a triangle is the sum of the sides. So in the diagram above, the perimeter has length a+b+c. Your program should assume that a correct version of hypotenuse has already been defined (you don't need to copy it from the first box to the second).

To talk about points living in two dimensions, we specify them using two coordinates (the Cartesian coordinate system), the x coordinate and the y coordinate. We would like to write a function whose input is a pair of points, and whose output is the distance between those two points. It turns out that the hypotenuse function helps us perform this task! 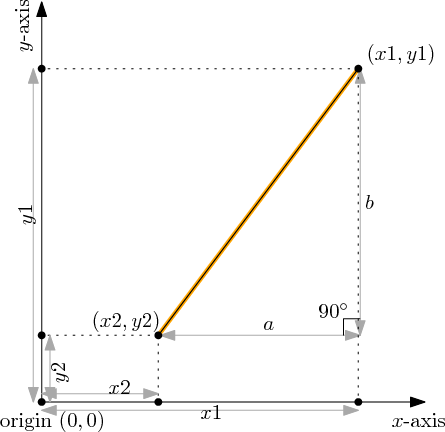 Perimeter of Any Triangle

We now have the final exercise of this lesson. Remember that the perimeter is the sum of the three sides lengths of the triangle; and note that the side length is the same as the distance between two of the triangle's points.

You are now ready to continue to the next lesson!

You will need to import math and call math.sqrt() on something.
Skip to toolbar